The climate of the Southwest can be extreme: summer heat that borders on suffocating, and a persistent aridity only alleviated by the violent monsoon storms of late summer. In light of these extremes, built environmental systems form the backbone of regional resilience for the Southwest. Water storage and delivery systems distribute water to otherwise dry areas, and a utility grid powers interior climate control and regional water pumping systems. Yet this resilience sits in precarious balance: if these systems are disrupted, damaged, or rendered inoperable, they lose their protective effect. In design and practice, they contribute to regional resilience, but in theory, they can also amplify vulnerability and the potential for disaster if they falter, given the reliance on these systems to cope with, and thrive in, a hostile environment. The fire season of 2011 highlights one such example. The Bear Wallow Wilderness started burning May 29, 2011, after a campfire was left unattended. The stage had been set in the weeks, months (and even years) leading up to the fire, as extremely warm and dry conditions in the first half of 2011 (Figure 1), pointed towards the possibility of a bad fire season. These conditions were further exacerbated by the multi-year drought gripping Arizona for much of the 2000s. Weather conditions in May and June (literally) fanned the flames, as sustained high winds and cratering dewpoints helped spread the fire once it had started. Satellite images from June 8th show the effects of winds from the southwest stoking the fire and pushing the smoke plume hundreds of kilometers to the northeast (Figure 2). The fire grew and spread, becoming the largest in Arizona history, and ultimately burning over a half million acres in Arizona and New Mexico (538,049 acres total; 15,407 in NM), before suppression efforts finally contained the fire over a month later in early July. 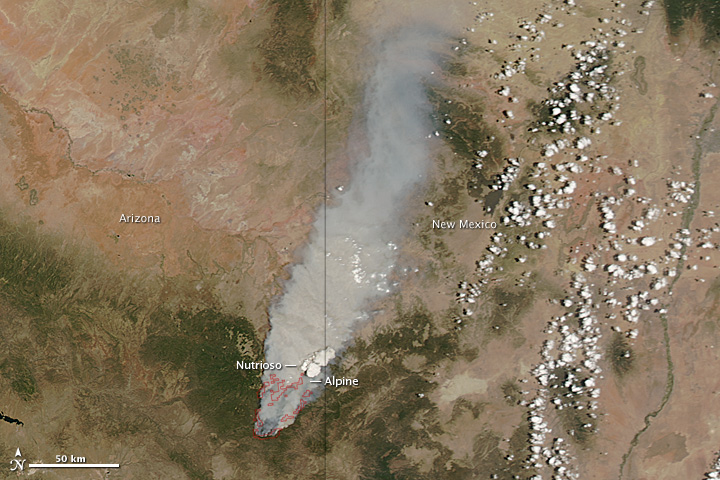 In addition to concerns about how a changing climate and persistent drought might shape ecosystem health[1], the fire season of 2011 (and the Wallow fire specifically) revealed a crucial point of vulnerability within the electrical distribution network of the Southwest. As the fire spread rapidly through the forests near Alpine, Arizona, threats to the utility network were felt hundreds of miles away, in Tucson and even El Paso, Texas. Regional electrical utility managers in Tucson were worried that fire might affect the large-scale electrical transmission lines[2] that run from the Springerville Generating Station (a coal fired generating facility just north of Alpine) to Tucson. This line is a critical piece of the regional electrical transmission network, because it is one of only two lines that provide electrical service to Southern Arizona (Figure 3), and interruptions would affect hundreds of thousands of people in the region. This goes beyond the electricity that powers air conditioning and swamp coolers, as these service interruptions would also af fect infrastructural elements such as water pumps, hospitals and public safety, transportation systems, and business and industrial interests. Utility operators in Southern Arizona worked on plans to implement rolling blackouts, although they hoped to avoid that option by bypassing the threatened line, and diverting electrical transmission capacity to lines that run from generating facilities west of Phoenix, south into Tucson. They were relatively certain this secondary source would provide enough electricity to meet local demand, but they also realized, that if both lines went down, the results could be disastrous. This was especially true if an outage lasted for an extended period of time during the peak of extreme summer heat – and if both lines were damaged, such an extended outage seemed likely. Contingency plans were complicated by the timing of the wildfire event, as June is one of the warmest months of the year in southern Arizona, and over 90-percent of households rely on interior climate control to buffer against summer heat. Loss of electrical service would not only affect safety and comfort at a household scale, it would also strain availability of electrical capacity on the regional market during a period of peak utility demand. Disruptions to transmission take place within a larger network of power generation, wholesaling, and distribution (Figure 4), and risks to these networks are not isolated to the geographic region where an outage or infrastructure damage occurs. 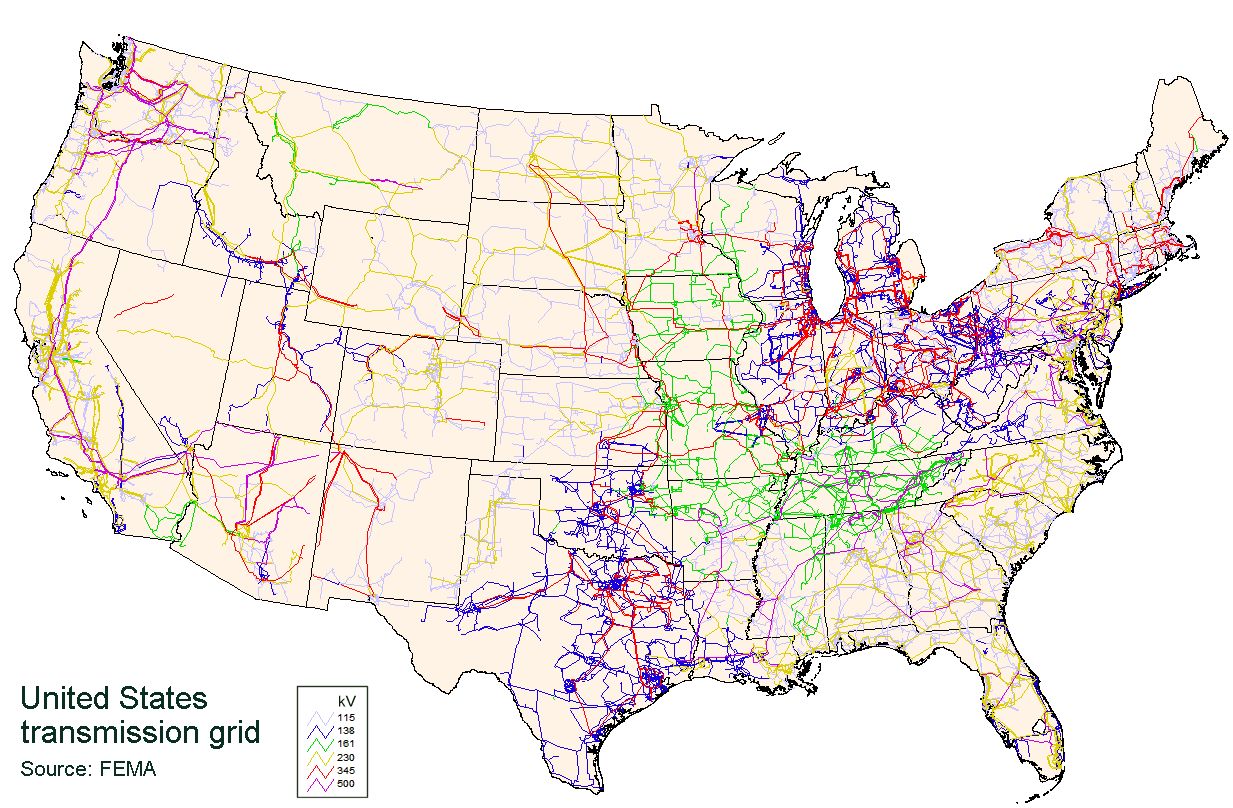 In the end, the fire did not actually cause any widespread outages or affect electrical service, but it did highlight concerns about the network of cascading impacts that could occur in a worst-case scenario. This was made all the more clear a few months later in September 2011, when human error at a distribution facility caused a power outage in San Diego, and resulted in service interruption and widespread impacts for much of Southern California, as well as portions of Southwestern Arizona. This event was thankfully brief, but was a reminder of the possibility of “high-impact/low-probability” events, and their disruptive effects (Garfin et al 2016).

The Wallow fire and the surrounding circumstances revealed critical points of vulnerability within regional systems designed to enhance resilience, not amplify vulnerability. Risks can accumulate within the very socio-technical systems meant to buffer populations from climate extremes. This example also encourages us to look closely at vulnerability and resilience from a systems perspective, and to reflect on the widespread investments in built environmental systems that ensure safety, comfort, and stability across the U.S. West. Vásquez-León et al. (2003), in an assessment of Southwestern vulnerability and resilience, identify the parallel work that buffers (components of the system that help mitigate exposure and risk to climate extremes) and coping (accommodations or adjustments that help blunt the perceived effects of these extremes) can do to facilitate everyday life within the context of these climate extremes. Residents, the communities and economies they inhabit and work in, and regional infrastructure development and long term planning evolved within the context of these extremes. These policies, actions, and responses help to render an inhospitable climate tolerable, even desirable. Extreme heat and intense aridity are at-times banal aspects of life in the Southwest. “Resilient” communities with hardened character are presumed to survive and thrive in the face of these extremes, a point of pride tied to weathering (pun intended) extreme environments. Behavioral adaptations help avoid exposure via coping (i.e. the ways that people and communities exposed to these extremes respond). But infrastructural components reduce exposure to these extremes, or help bypass them altogether. These systems are a key part of regional population security and sustainability, but their capacity to buffer against extremes is a key aspect of risk and resilience in the Southwest.

Expanding on the notion of buffers – especially those put into place with the intention of ‘solving’ the environmental problems of climate extremes – we can more carefully consider the role they play in protecting regional communities – population security via infrastructural investments. Collier and Lakoff’s (2008, 2014) notion of “vital systems security” provides useful insight on threats to critical systems (and infrastructure), as well as how these systems and the improvements they bring can also drive increased risk and vulnerability. In the Southwest, the built environment stores and distributes water, and mitigates exposure to heat, blunting the ‘hostility’ of the baseline climate and allowing communities to thrive in spite of these extremes. Increasing reliance on these systems – however resilient they may be – also highlights accumulated risk and vulnerability within these systems, where the failure – the embedded vulnerability – is tied not just to the extremes these systems buffer against, but the impacts and implications if these systems fail or become unavailable (either through lack of access or degradation of existing distribution systems).

The Wallow fire highlights the extensive network of cascading effects an event or series of events might have, and reveals that while resilient systems may help buffer against environmental risks and climate extremes, these buffers also increase the stakes for social and institutional systems that come to depend on these buffers, which are the reason and the source of accumulated vulnerabilities embedded within built environmental systems. Security and sustainability depend on anticipatory planning (Quay 2010) that identifies these vulnerabilities and the plausible pathways for cascading effects, including events that are low probability, but high impact (Garfin et. al. 2016). This planning is contingent on improved understanding of the roles that a changing climate, a growing population, and increasing resource scarcity all play in defining regional systems-level vulnerability. This includes vulnerability of the systems themselves, as well the vulnerability of people whose lives are affected by the disruptions (and adaptations) within the context of these systems.

Collier, Stephen, and Andrew Lakoff. “The vulnerability of vital systems: How ‘critical infrastructure’ became a security problem.” The Politics of Securing the Homeland: Critical Infrastructure, Risk and Securitisation (2008): 40-62.

[1] O’Connor et al. (2014) identify the relationship between wildfire risk and climate change in the Southwest, highlighting an uptick in fire severity and extent – wildland fire potential projections reflect these increasing risks. Multi-year drought conditions and a warming climate – along with ecosystem dynamics – such as the emergence and spread of forest insect damage, and reduced streamflow and soil moisture all contribute to the cluster of conditions that increase wildfire risk.

[2] It was not the risk of transmission lines burning that was their primary concern: the steel towers are thought to be secure (given fuel load reduction along transmission right-of-ways, the properties of steel, etc.); rather, the carbon in the soot and smoke could cause the transmission lines to ‘arc’ and short out. This would result in failsafe triggers leading to service interruptions and shut-downs, regardless of the physical integrity of the system.

Built environmental systems contribute to regional resilience, but they can also amplify vulnerability and the potential for disaster if they falter.